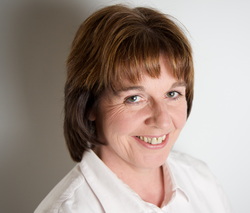 Pam Everitt
Lic. AC. BA (Hons), MBAcC
I first became interested in the principles of Ancient Chinese Medicine in 2001.  This inspired me to train as a Five Element Acupuncturist at the College of Traditional Acupuncture in Leamington Spa.  Founded in the early 1960's, this was one of the first acupuncture training colleges to be established in the UK.
I am a member of The British Acupuncture Council, the UK's largest regulatory body for the practitioners of traditional acupuncture.

About Acupuncture
Acupuncture is a system of healing developed over thousands of years as part of the traditional medicine of China and other Eastern Countries.  The long-term survival of acupuncture is a convincing tribute to its effectiveness.
A fundamental principle of this system is the subtle energy, Qi, which moves through a series of channels beneath the skin, known as meridians.  The continuous and balanced flow of Qi through these meridians is essential for optimal health.  When the flow of Qi is blocked illness may result.
The flow of Qi can be disturbed by a number of factors.  These include emotional states such as anxiety, stress, anger, fear or grief, also, poor nutrition, hereditary factors, infections and trauma.
The principal aim of acupuncture is to involve the whole person in the healing process.  When illness develops, regardless of what it is and where it locates itself, the entire body becomes ill.  The treatment recovers the equilibrium between the physical, emotional and mental aspects of the individual.
The first consultation and treatment lasts for one and a half to two hours. Subsequent appointments are for three quarters to one hour.
www.pame-acupuncture.co.uk